I almost didn't blog today. Because I am supposed to be (and want to be) you know, reading. January is, after all, my self-proclaimed Permission to Read Month in which I have granted myself and everyone else in the world permission to read without guilt this month to the exclusion of all other activities save those which may be deemed lifesaving such as eating and sleeping and showering.

I started off with City of Ember by Jeanne DuPrau. While I had seen the movie and loved it, a teacher I work with highly recommended I read the book, saying that it is ten times better than the movie. She was right. It is a dsytopian novel about a world underground and the young heroes, Lina and Doon, who save the city. While the movie had me riveted, there is no way it can carry the subtleties and nuances of the characters and the world portrayed in the way the book did. This is why I love fine writing. To build the characters into life in my head, to make the city of Ember spring up around me - no movie can do that. But words can. I definitely will read the next three books in the series. In the meantime, I got waylaid by my desire to read......

The Hunger Games by Suzanne Collins. I have been wanting to read this for quite some time, knew I definitely did not want to see the movie until I read the book - and was not disappointed! Woo hoo! Yes, I know I am behind the times and all the rest of humanity read this eons ago, but wow! That was one heck of a book.

It's actually a trilogy, another dystopian story, of a world ruled by dictators who force the conquered populace, through starvation and violence, to sacrifice their children in yearly killing 'games'. The first book, The Hunger Games, was so enormously well crafted that I frequently forgot to study Ms. Collins' actual craft. I got sucked into the action, the events, the emotions, the characters, the world and forgot to think about the writing (I try to study the writing to improve my own). But I can say that through the subtlety and nuance mentioned above, and through Ms. Collins' careful character crafting giving us access to her main characters' thoughts and emotions, I felt someone finally understood that I lead a secret double life in my head as Katniss, the hunter, the warrior, the protector. And don't we all feel that? Isn't that the goal of a fabulous, strong, yet flawed main character? To have people identify so strongly with the character that they walk around 'being' that character in their heads?

At any rate, I loved the first book so much I hated for it to end and went straight on to the second book, Catching Fire, which was aaaallllmost as good as The Hunger Games. The main characters, Katniss, Gale and Peeta continued to be well-developed, the action rolled. I continued to be Katniss in my head, continued to eat up the pages just as fast as I could. Through the characters' actions, words, back story and thoughts made clear, all the characters, as well as the setting and events continued to have that fabulous additional nuance of understanding that only words can bring. I love great writing. I truly do.

The third book Mockingjay was also definitely a good read. However, a couple of things kept it from being as fabulous for me as the first two. We got too much into Katniss' head in this book. Apparently there's a line between allowing the audience access to your character's thoughts and emotions, and moving the plot forward. Don't get me wrong - there was plenty of action. But we dwelled in Katniss' thoughts instead of having access to them and moving forward. And while it was a nice, neat, wrapped up ending (kind of like the ending to Harry Potter and the Deathly Hallows where we see Harry, Ron, Hermione, et al grown up with children of their own) - it was a tad too neat and wrapped up for my taste. I recommend all three and would be interested in your thoughts.

I also read the ebook version of Rich Fabric, An Anthology. This is an anthology about the tradition and lore of quilting, conceived of and put together by author Melinda McGuire. I contributed some photographs and a short story for this project, which benefits the Twilight Wish Foundation, which grants wishes to senior citizens. Rich Fabric is chock full of interesting stories and memoirs about quilts and quilting, and the ebook version has color photographs as well as music from Twang Darkly, awesome Appalachian fusion. I so recommend this if you are at all interested in sewing, history, quilting, families or making the world a better place for needy elders.

And lastly, I have just started Artemis Fowl, The Eternity Code by Eoin Colfer, which is apparently the third Artemis Fowl book. I know I read the first one a few years ago, and admired it. Having just started this one last night, I am so far a bit confused, thinking perhaps you need to read all the books sequentially so as to be in the loop' while reading. Jury's still out on this one since I've just started.

With four days to go in Permission to Read month, I better take full advantage! The volume I've read so far this month is far more than my usual, although I'm not sure if that is due to my 'permission' or due to my new Kindle Fire (of which I am inordinately enamored). I think I've decided that I should remember the sheer pleasure a little permission provides.

Have you taken advantage of Permission to Read month? If so, what have you been reading and what are your thoughts? I'm dying to know!

I am the anti-resolutionist, as you may know from this blog post. It's ok. I've been called worse. I was waffling about what changes, if any, I'd like to make in my life.

I have decided. January is now officially my Permission to Read month. After work, and things a person must do to keep home and hearth from completely falling apart, I have given myself guilt-free permission to . . . read. Just read. Happy sigh.

This sounds rather anti-climactic unless you know my secret: as a child, I used to fantasize about being locked in the library all night, or ecstasy - all weekend! Just me and tons of books. I love their smell, I love their feel, I love the worlds they spin around me. I adore a well-turned sentence. I took books camping, babysitting and spent much of my elementary school years surreptitiously reading my own books hidden by the cover of whatever school texts I was supposed to be reading, or half-hidden in my desk. And sadly, it has been several years since I have felt I had the time to read for pleasure.

This Permission to Read month will do several things for me: 1. make me a better writer and sharpen my brain just by reading others' well-turned sentences and plots; 2. bring me sanity, relaxation and pleasure - all of which are much needed; and 3. give me some breathing space to think.

That's my rationalization. But really, it's all pleasure. 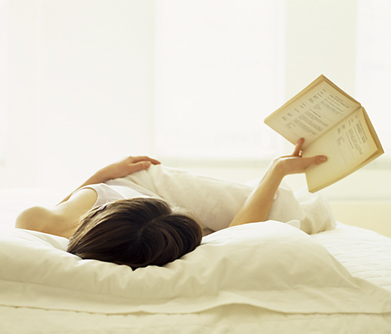 Posted by karastewart at 6:57 PM 2 comments:

Promote Your Page Too